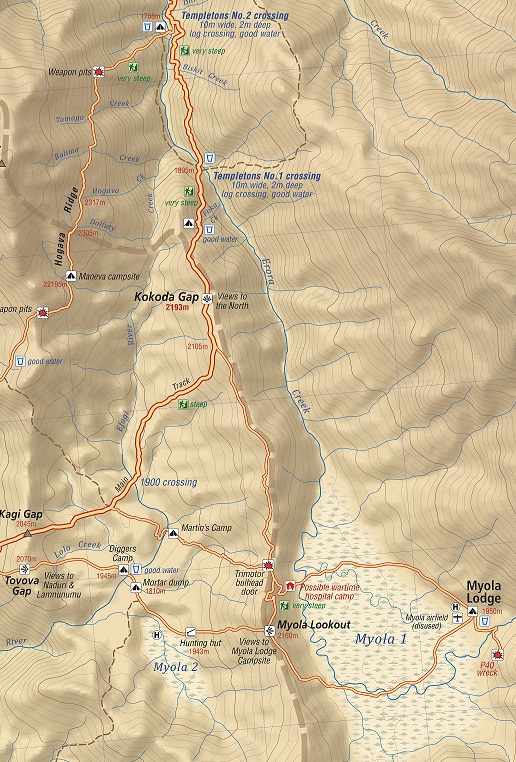 Your briefing this morning will focus on the significance of the area between Templeton’s Crossing and Eora Creek and the crisis of command in Australia as the result of the difficulties the Australians had of dislodging the Japanese defenders from their camouflaged and fortified defensive positions.

The Japanese were ordered by higher command to withdrew from Ioribaiwa Ridge back to the beach-heads at Buna and Gona because of the strategic shift to the Solomon Islands where 36,000 Japanese were engaged in a massive battle against 60,000 American troops.

General Horii reluctantly accepted the order but remained alert to the possibility of stopping the Australian advance and continuing his quest to capture Port Moresby.  With this in mind he established heavily fortified positions bristling with machine guns.  They were well camouflaged with well selected killing grounds connected with communications trenches.

For the advancing Australian scouts it was lethal as they could not see the camouflaged machine gun muzzles protruding from their firing slits until it was too late.

The defences were such that it took the Australians 13 days to fight their way through an area that takes us half-a-day to trek today.

As we begin our trek towards Eora Creek you will understand why it would have been so difficult for the Australians to fight given the rugged terrain and natural camouflage. 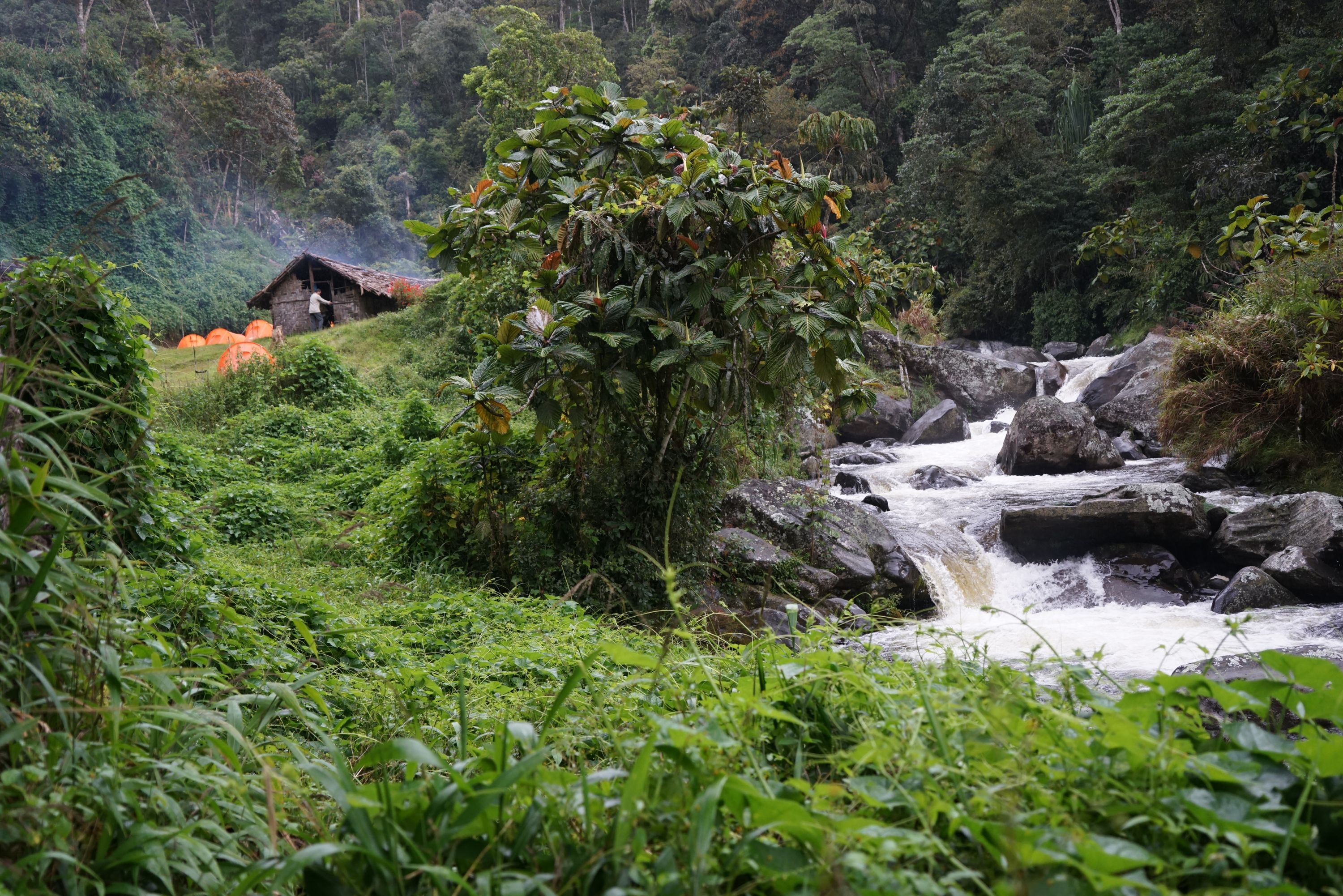 We stop for morning tea on Vagebau Creek then continue to the crest of Vabula Ridge at 1,905 meters AMSL.  The scenery as we begin our trek down the ridge is spectacular.  We arrive at a knoll which was used by the Australian 2/14th and 2/16th battalions as a delaying defensive position during their desperate withdrawal on the night of 1 September 1942.  Your trek leader will provide a briefing on the position from the front weapon pit.

We then proceed to an Australian mortar positon where you will see live ammunition – 3 inch mortars and M36 hand grenades stacked beside a pit.  Please do not touch. 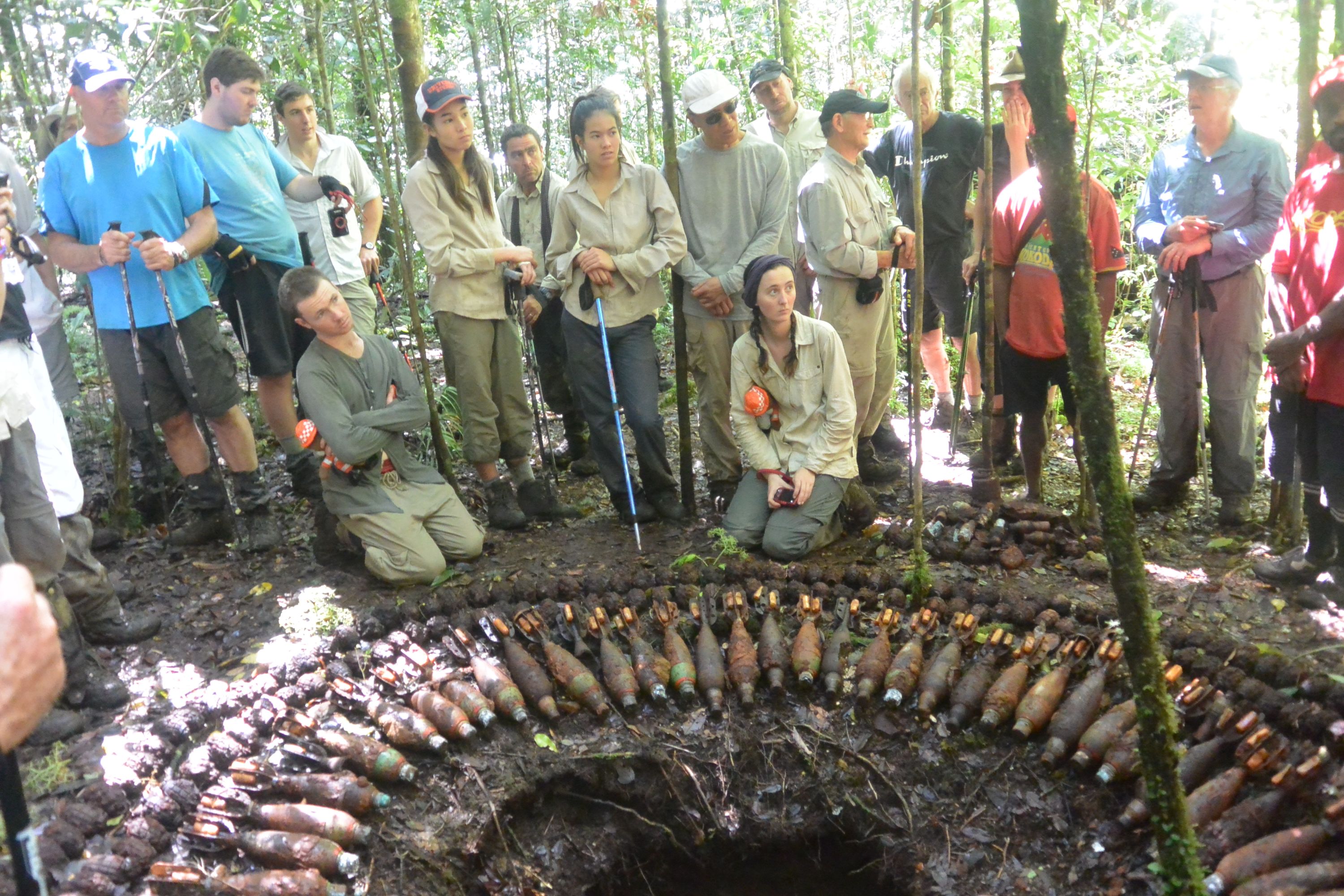 We then trek down a steep spur with weapon pits on each side of the track before we reach the abandoned village site of Eora (formerly known as Iuoro) at 1,450 meters AMSL.

Henry Hamilton Stuart-Russell was the first European to pass through the Kokoda Gap on his way north and reach this point on 1 July 1899.  Here he found the natives to be ‘friendly and hospitable’:

‘The old chief, Iovo, tried hard to dissuade us from going on to the Yodda Valley declaring we would all be killed.  However, when he found we were resolved to go on, he personally escorted us some distance.’

Stuart-Russell’s party continued on until they met two natives fishing on a bank.  The pair greeted the travellers cordially enough but half an hour later, the two men returned accompanied by 40 or fifty men, preceded fully 100 yards (about 90 meters) by their chief.  Waving aloft a taro plant, he rushed right up to us – an instance of confidence that I have never seen before so boldly displayed, and at once dispelled any doubts I may have had as to our friendly reception.

So convinced was Stuart-Russell of the natives’ peaceful intentions he moved his camp the following morning to a hill near their village.  During the afternoon however, a ‘change set it’, as he put it, and after a rifle was snatched up and an unsuccessful attempt was made to fire it, the surveyor realised he was in a precarious situation.  Stuart-Russell later reported:

'Men came pouring in, from all quarters, armed to the teeth; the discharge of that rifle would have been the signal for a general attack, in which we would have had a very slender chance'.

Consequently, Stuart-Russell commenced his withdrawal, at first without conflict but while crossing the Mambare, the party was attacked:

Looking back as far as I could see was a forest of spears and clubs … Though they came on again and again with the usual bravery of all natives belonging to that district, they were repulsed every time with loss, and eventually drew off, not a man in my party having been injured.[i]

A little over 43 years later another desperate battle was being fought.  One can only imagine the chaos at this village as the Australians desperately tried to hold off the Japanese to but time for them to evacuate the wounded back up the track.  Tragically they were not able to get them all out and some had to be left behind. 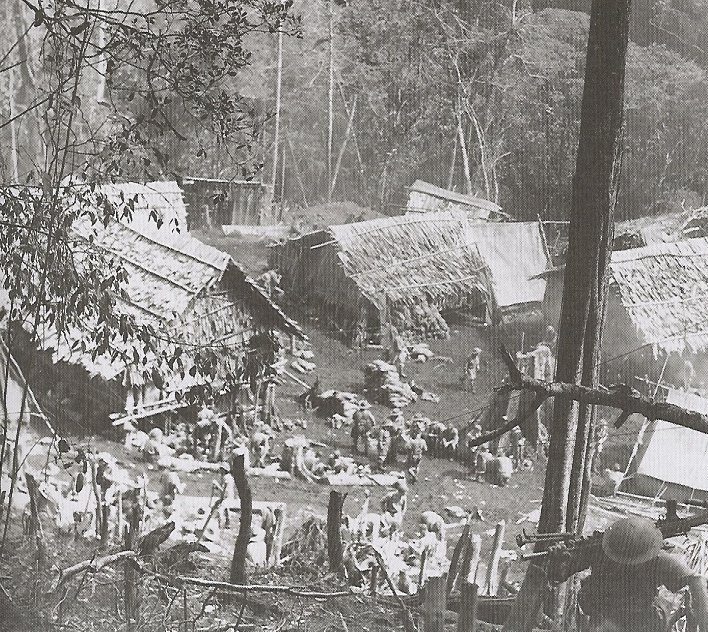 For reasons known only to the Australian Government there is no interpretive memorial at Eora Creek but if trees could talk they would tell of the most harrowing experiences of our wounded troops trying to escape the advancing Japanese.  As they began to cross the raging creek below the situation for the stretcher cases lying in the mud was desperate:

‘Dr Magarey addressed the dozens of besmeared faces blinking up from the mud: ‘I want every man who is capable of walking . . . to start off for the top of the hill.  We haven’t got enough bearers to carry everybody, but this place must be cleared tonight.[ii]  The stretchered troops were told to drag themselves out.  ‘A personal appeal was made to the men to walk, even if only for a few 100 yards without assistance’[iii].

‘Like slave drivers we urged them on, some hobbling, some staggering like drunks,’ remembered Steward.  ‘They slithered, crawled and clawed their way through the mud, faces twisted with effort . . . Men can rise from dreadful paid to superlative heights.'[iv]

All but three stretcher cases were evacuated from Eora during that desperate pre-dawn struggle.  These badly injured men – two with abdominal wounds, one with an open chest wound – were given up for dead.  Dr Magarey calculated they had half an hour to live.  Later a medical patrol returned and found one of these men miraculously alive.  The youth opened his eyes and asked an officer, ‘You’re not going to leave me here, sir?  I won’t be left behind?’.[v] 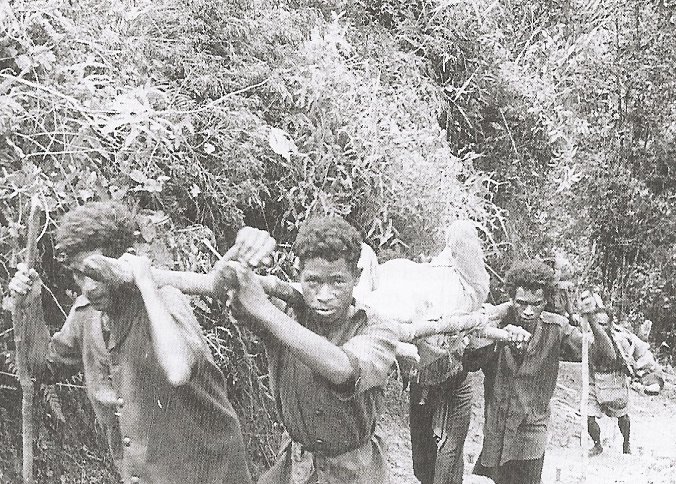 Magarey arranged to get the boy out – which was done – and he lived for several days on the shoulders of the fuzzy wuzzy angels.[vi]

‘Time and rain and the jungle will obliterate this little native pad; but for ever more will live the memory of weary men who have passed this way’.

Eora Creek is the most hazardous crossing along the trail and extreme care must be taken. Your guides will check the bridges and reinforce them with rope – they will carry your backpacks across and individually escort each trekker to the other side if the level of the creek has increased due to rain in the area. 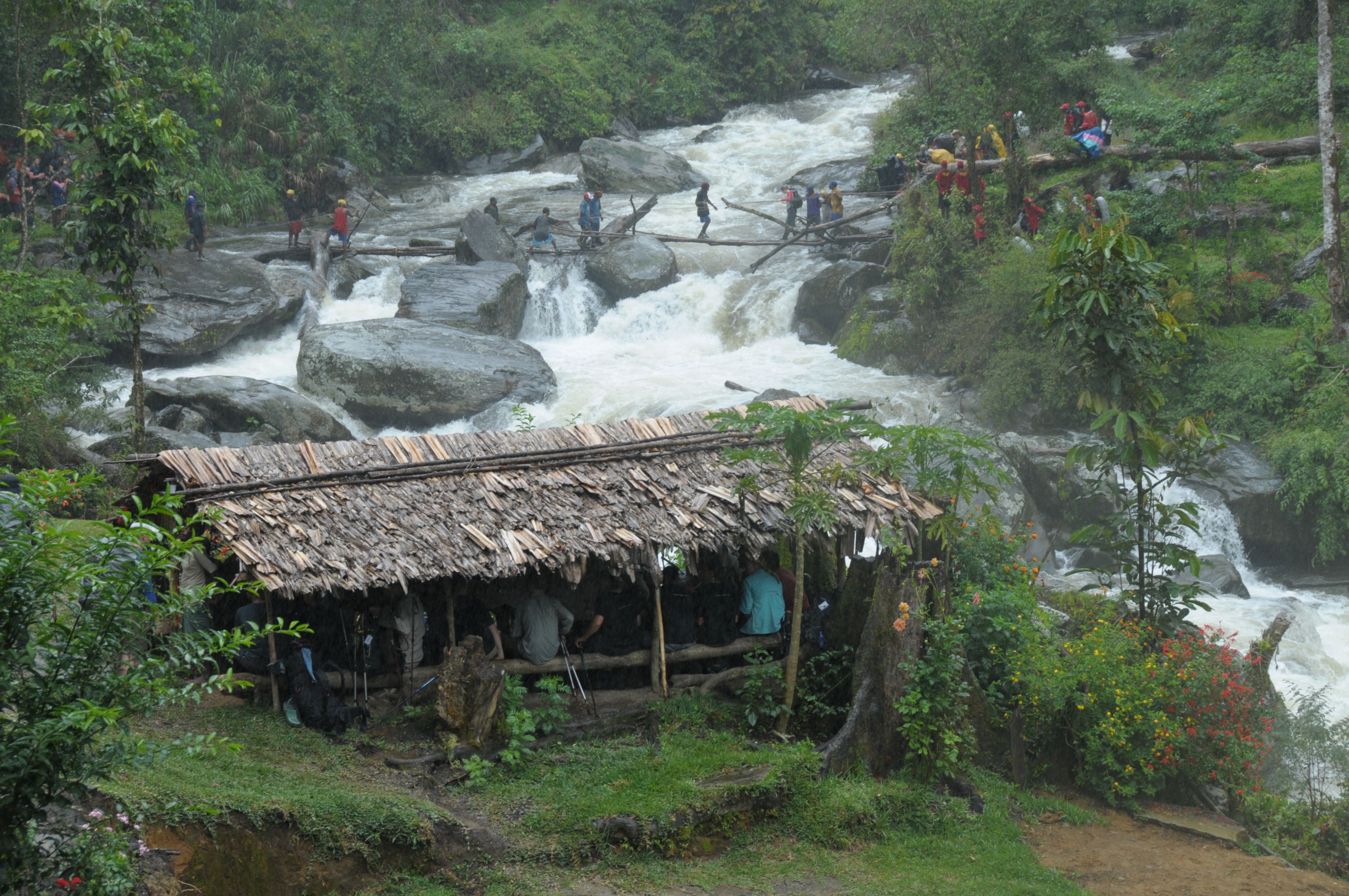 We now leave the main track and take the route up the eastern side of the range to Abuari village.

This is one of the most primeval sections of your trek as very few take this route.   buttressed tree roots, moss covered rocks and cascading creeks – Ovaveu, Oiba, Lomotaote, Savea and Ai provide a haunting setting as the morning mist sweeps up the valley.  After Ai Creek there is a short climb to the edge of the ridge where the track now runs parallel to the main track on the western side of the range until it reaches Abuari village.

Abuari is off the beaten track and is a far more traditional village than those that have been exposed to trekkers over the past decade. 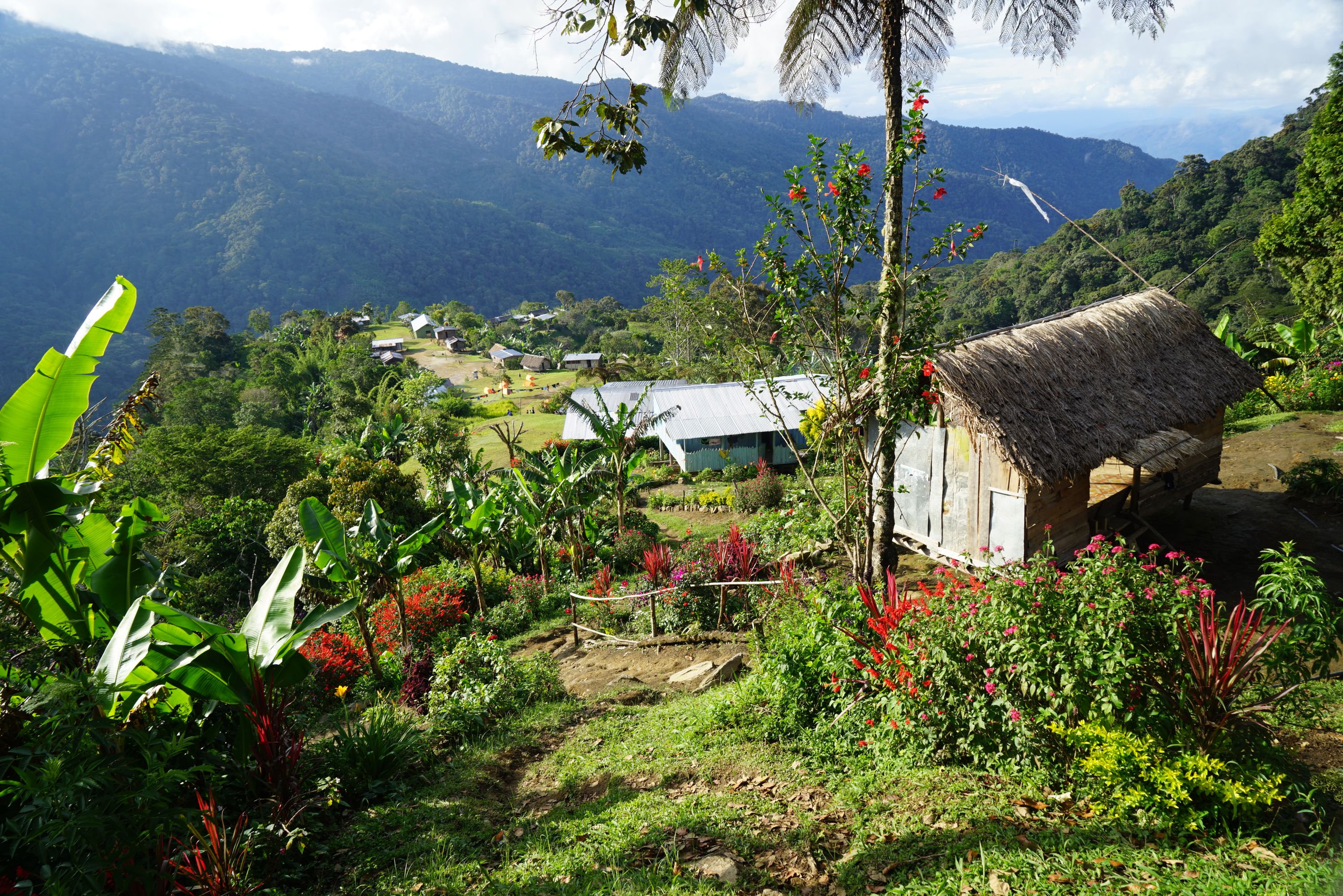 The village was relocated to the current site after the war and sits on the side of a large mountain at 1,550 meters.  You cannot move around the village without climbing somewhere.  Our campsite is towards the centre of the village.  Those who take the 10 minute walk to ‘Abuari Heights’ will observe a scene of subsistence beauty that landscape architects would find difficult to replicate.

Northwards and downwards from the campsite is the heart of the village with a modern school built by Rotary International; a traditional elementary school built by the villagers  and a health centre with expansive views down the Yodda Valley towards Kokoda.

Your trek leader will provide a briefing on the unsuccessful defence of the eastern side of the range by the 53rd and 2/16th battalions at Abuari and Missima.  He will explain the implications of the defeat on the desperate battle for Isurava which had been raging for four days on the other side of the range.  Brigadier Arnold Potts was forced to withdraw all of his force further back along the trail because they were in danger of being cut off from the eastern flank.

We then trek down to the Abuari – Waterfall track junction at 1,330 metres AMSL.  It was here that the Commanding Officer of the 53rd Battalion made an ill-feted decision to follow up his troops believing that the trail down to the waterfall had been cleared.  Unfortunately this was not the case and Colonel Ward and his battalion headquarters walked into an ambush at the waterfall and were killed.  Their bodies were never recovered. 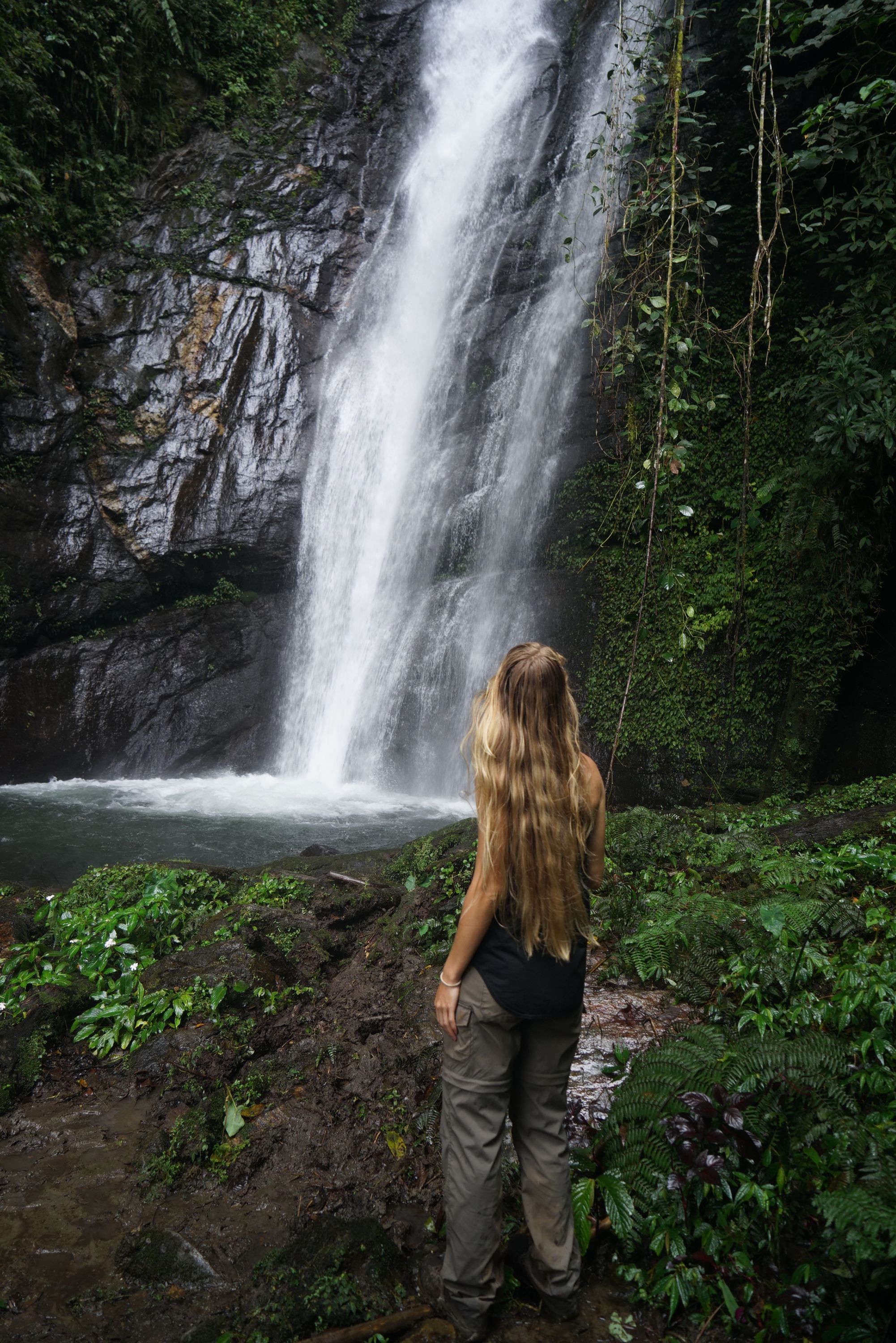 Today the waterfall is a reminder of the awesome power and spectacular beauty of Mother Nature. Adventure Kokoda is the only trekking company that takes this diversion to a forgotten phase of the Kokoda campaign so those who go get to trek where few have been.

We then return to the junction and trek down to Eora Creek valley where we have two spectacular crossings which are transformed from a pristine watercourse to a raging, thunderous white-water obstacle during the wet season. 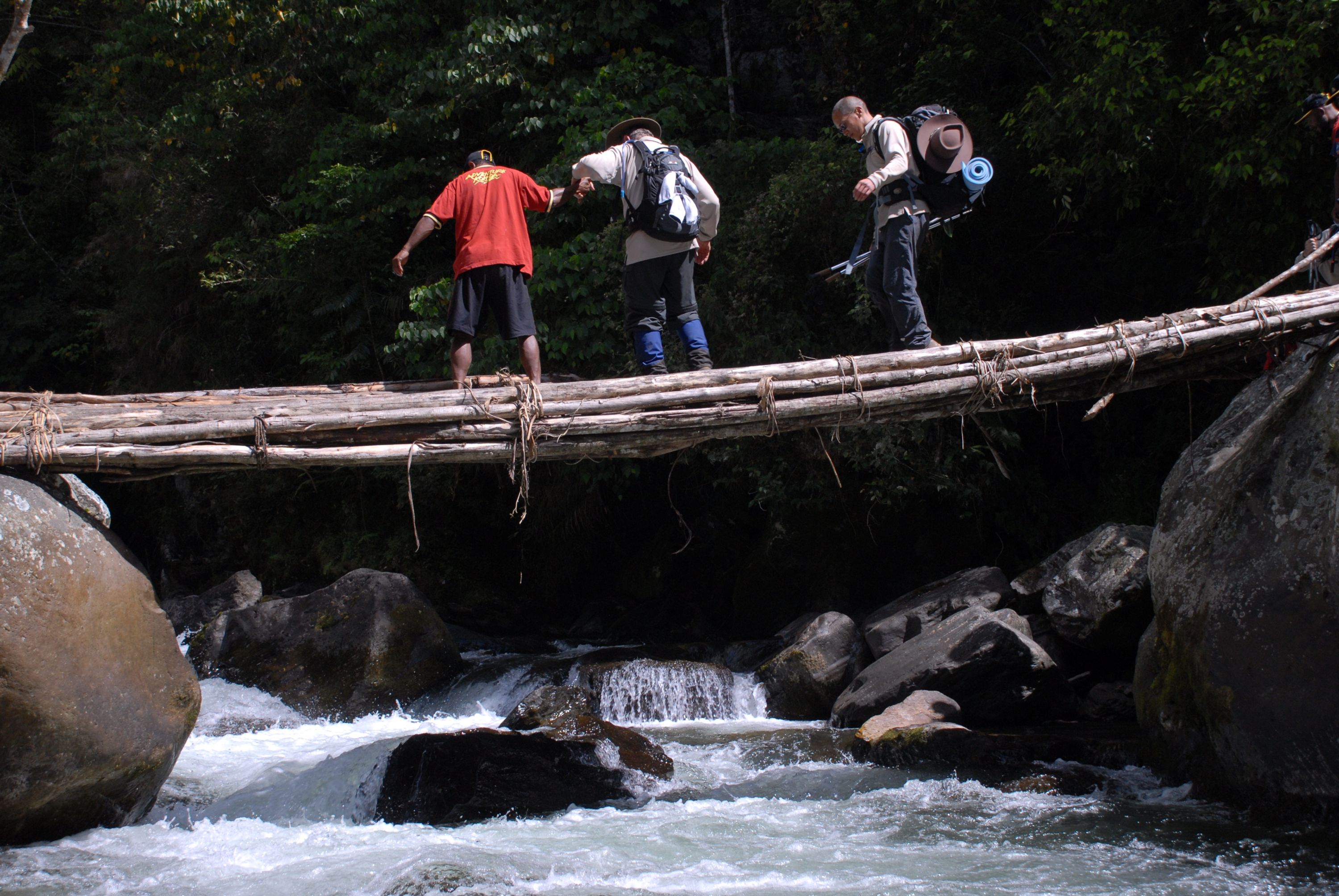 We wonder at the possibility of the transformation as we sit down to lunch prepared by our ‘bos-kuk’ on the edge of the creek.

We now have a steep 40 minute climb to the junction with the main track and another 20 minutes up to Alola at 1,400 meters AMSL - a small village with about 60 people from the Niguri Clan.  It has a small campsite and is located on Kaeledaba Creek.

The track continues northwards out of the village.  About 20 minutes along is a clear ridge where the wartime village of Alola was located.  It is now an abandoned site.  The track then follows the ridgeline across numerous creeks – Belave, Aya Dakatni, Evoya, and Ololi to the rear of the Isurava battlesite at Alo Creek (named ‘Back Creek’ by Lt Col Ralph Honner to delineate the rear of his defensive position).

The battlesite at 1349 meters AMSL was rediscovered by Charlie Lynn in 1996 using Australian Army topographical maps, a GPS and local guides. The site was confirmed when Charlie brought some veterans from the 39th and 2/14th battalions to the site for a ‘Last Parade’ later that year. On the 60th anniversary of the campaign in 2002 Prime Ministers Sir Michael Somare and John Howard opened a solemn memorial at the site. 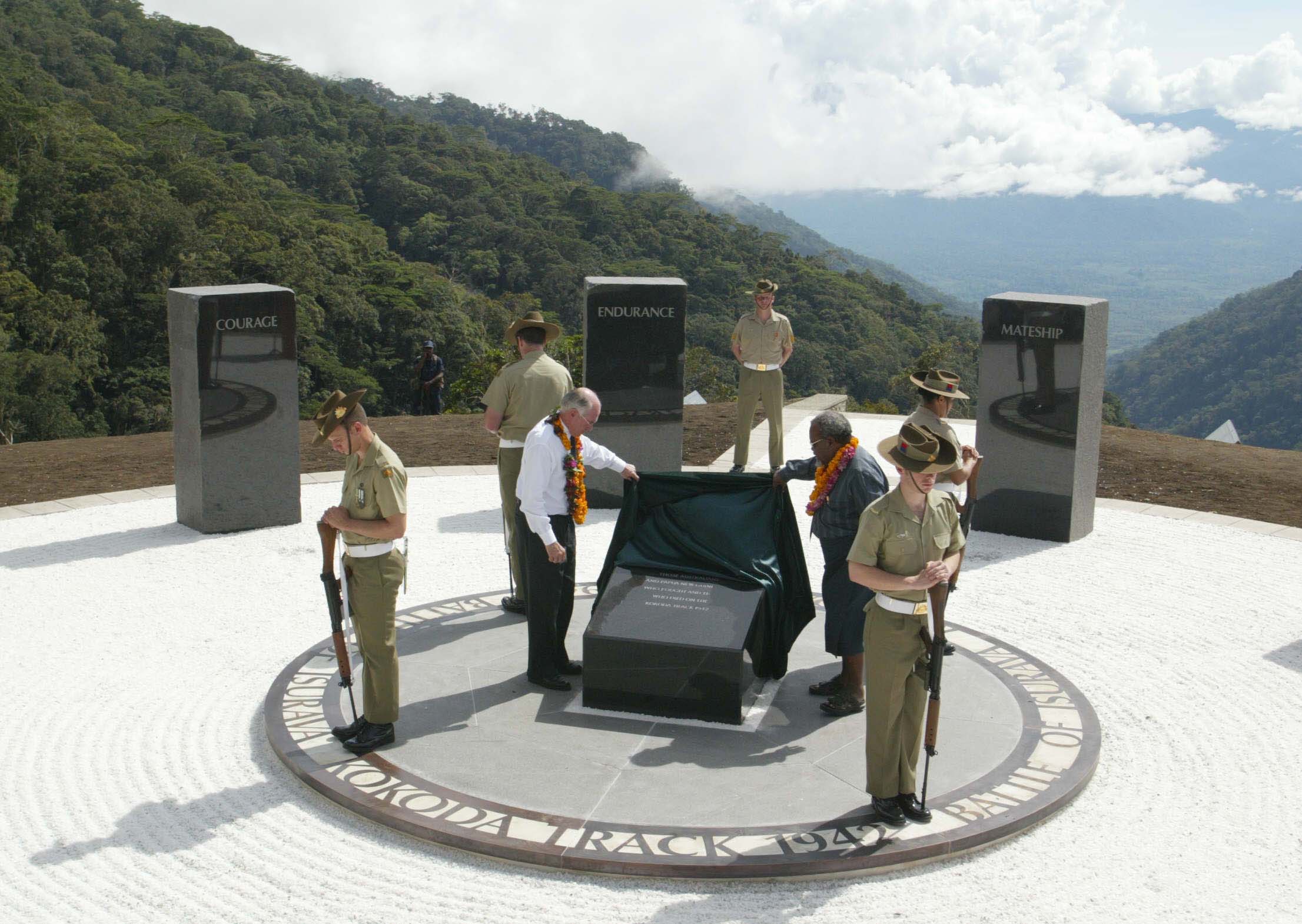 The memorial now has a spiritual presence – four granite pillars stand like silent sentinels on this sacred site – each engraved with a single word: Mateship – Sacrifice – Courage – Endurance.  A haunting reminder of a desperate struggle against all the odds by a generation we will  forever be indebted to.