We engage professional trek leaders who have no peer on the Kokoda Trail:

Our Niugini Guides and Carriers

Our Niugini guides and carriers are the grandsons of the legendary 'fuzzy-wuzzy angels' and come from the villages we trek through.  They are just as dedicated to getting you safely across the trail as their grandfathers were to our diggers.

They will proudly introduce you to their families as we pass through their villages. They truly are masters of their environment and great company during our treks.  They will discuss their cultural traditions with you around the campfire during the trek.  They are simply the best of the best in PNG. 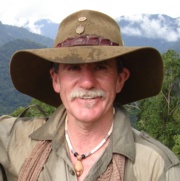 His company, Adventure Kokoda, engages professional leaders to ensure trekkers have an unsurpassed wartime historical experience.  His leadership team has a combined total of 160 years military service and has led more than 7,000 trekkers from all walks of life safely across the trail over the past 30 years.

Charlie has led 99 treks across the trail and has developed a close relationship with the Kioari and Orokaiva people over the years. He established Network Kokoda as a not-for-profit company in 2008 - it is now the leading philanthropic provider for villagers along the trail.

In 2015, Charlie was inducted as an Office of the Logohu* by the Papua New Guinea Governor General, Sir Michael Ogio for service to the bilateral relations between Papua New Guinea and Australia and especially in the development of the Kokoda Trail and its honoured place in the history of both nations over the past 25 years.

Only six of these prestigious awards are allocated in the annual Papua New Guinea Honours and Awards list each year.

* Logohu is a Motuan ward for the bird-of-paradise, the official national symbol of Papua New Guinea since its independence. The Order consists of three classes and a medal.