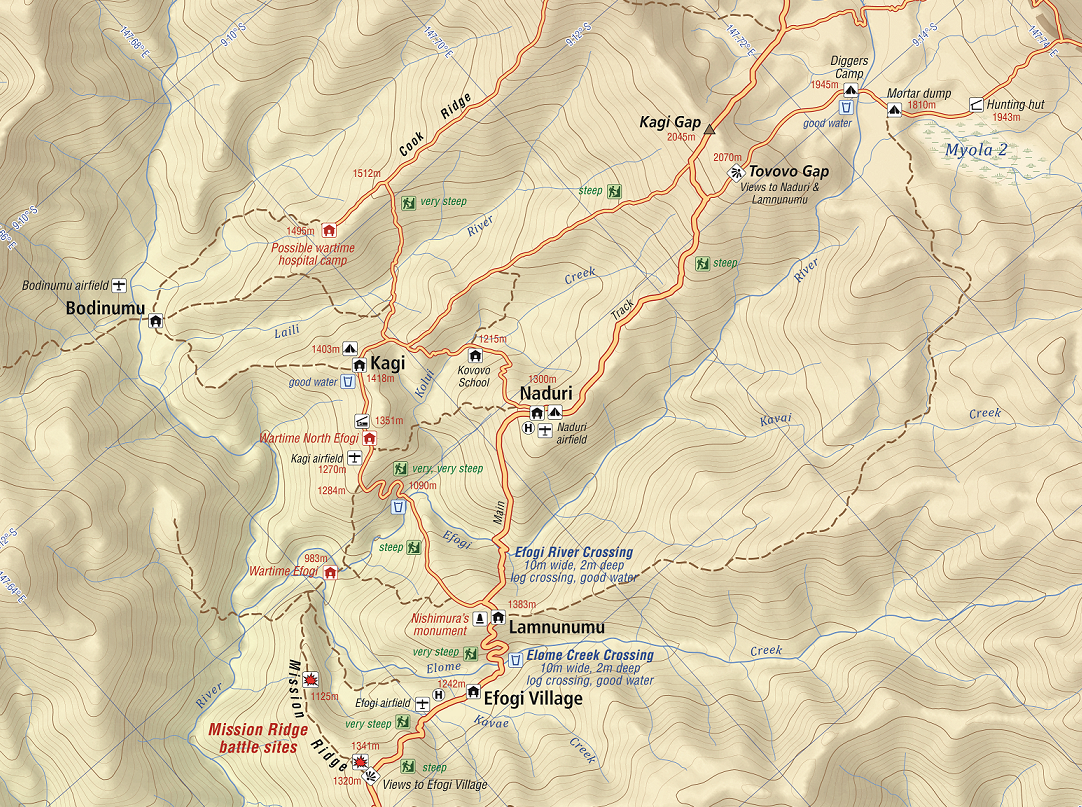 The track leading out of the village descends to the Kavai River before a sharp 25 minute climb to Efogi 2, or Launumu village.  At the entrance to this village one can see the views the Japanese had of the Australian defensive positions on Mission Ridge as they crossed their start line on the evening of 5 September 1942.  To the rear is the ‘forming up place’ where the Japanese would have formed up and completed their final battle procedures before crossing the start line for their attack on Brigade Hill.

Today there is a small Japanese monument in the centre of the village.  It was erected by Corporal Nishimura, one of the few Japanese survivors who returned to the area 37 years after the war to recover the bodies of his comrades and release their spirits. 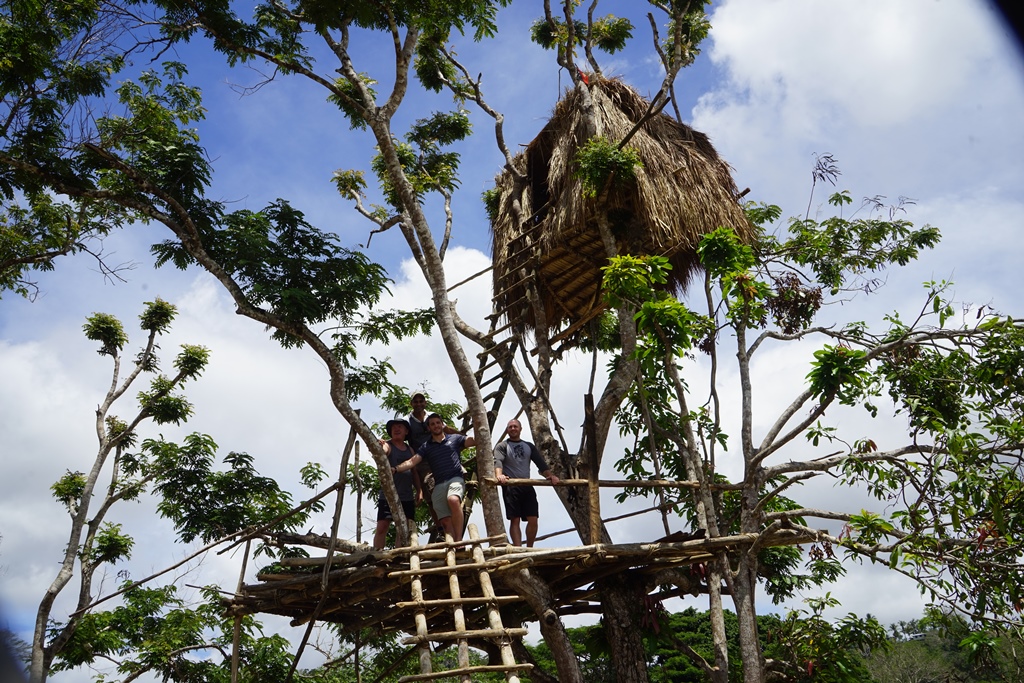 The track leading out of the village descends gently for about half-an-hour before it drops steeply to Efoge Creek.  After crossing the creek there is a steep ascent to the village of Kagi (formerly known as Hagari[i]).  This is probably the most ruggedly picturesque section of the trail. 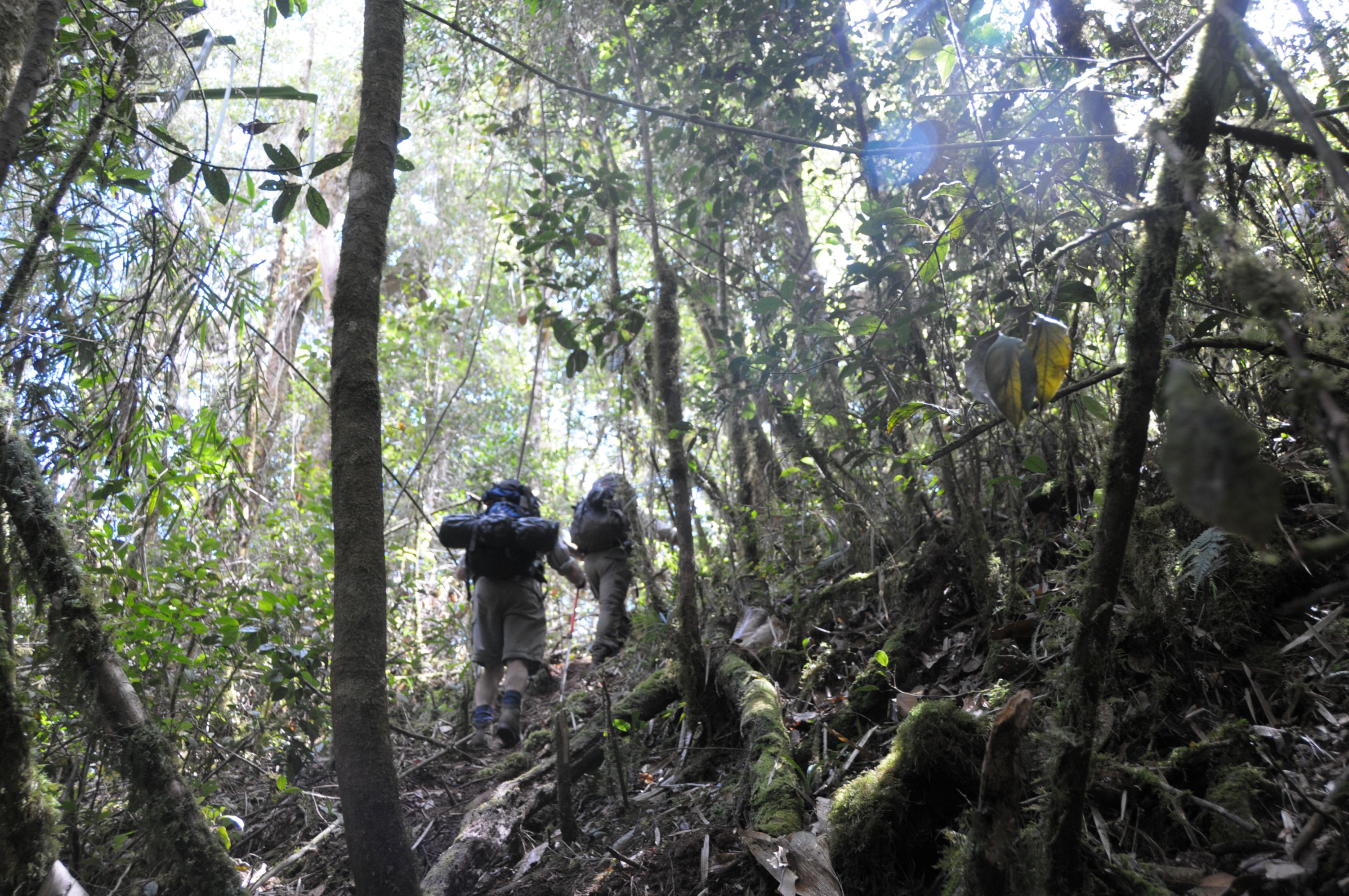 Kagi village has approximately 120 people.  It has an airfield, a VHF radio, water-points and guesthouse facilities.  The Kagi people were identified by the early explorers (McGregor) as ‘a fighting, aggressive community[ii]’. They have since been converted by Seventh Day Adventist missionaries whose influence today is evident - they have a satellite dish on the top of the church but nothing on top of the school!

The wartime village of Kagi was located on the ridge to the south-west of the current village. South of the village is an airfield which has an interesting profile. The fuselage of a Cessna is a reminder of the hazards of flying in PNG.
The track out of Kagi leads northwards towards the Kagi Gap and into the moss forest area towards Mt Bellamy and the Kokoda Gap. About 10 minutes along this track from the village there is a junction with a track leading down into a valley where the school of Kovovo is located.  This is the biggest village school along the Track.  It has five teachers and 97 students who come from the surrounding villages of Efogi 1, Efogi 2, Kagi, Lamagi, Daoi, Envilogo, Naduri and Menari.  It is situated on Kolui Creek.

We then have a long climb towards the clouds to the Kagi Gap. It takes about an hour-and-a-half to reach the lookout which has extensive views to the south coast. One could only imagine the thoughts of the Japanese soldiers as they saw their distant objective for the first time.

It takes another 20 minutes to reach the top of the ridge and enter the moss forest where:

'a wonderland of giant trees festooned with flowering creepers bearing a bewildering mass of parasitic and saprophytic plants – orchids, staghorn ferns, and ‘mistle-toes’ of strange hue and shape. The sun’s light rarely penetrates to the floor of the jungle where hundreds of species of trees and thousands of species of smaller plants riot in disorderly variety all together. Because rainfall and humidity are higher the cycle of germination, growth, decay and death is faster. The forest lives on the product of its own wet rottenness. Mosses, ferns, lichens and fungi are everywhere. The moss forest can be an eerie place at night as large areas are infected with The trail through the area is wide, the moss covered ground is spongy, the views are spectacular and the mist that often pervades the forest is haunting'. 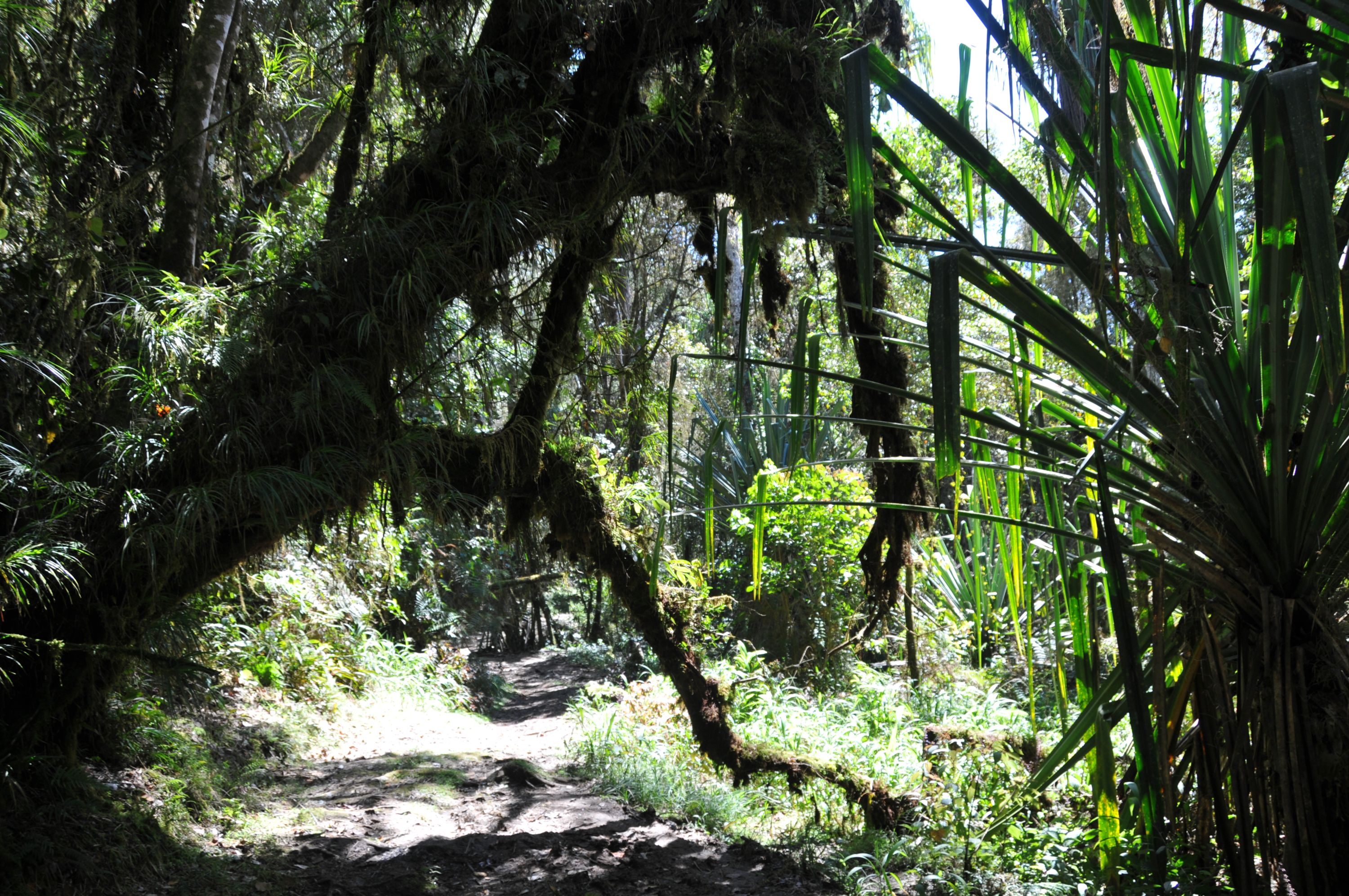 We then trek down to our Bomber’s campsite for the night. The campsite was developed by one of our former Adventure Kokoda trek leaders, Martin Rama, after the discovery of an American bomber aircraft in the mid-90s. The bodies of the crew were repatriated to the Unites States for a military burial at Arlington War Cemetery. A 500lb unexploded bomb was detonated creating a huge crater which is now filled with water. Parts of the aircraft can be seen near the crater. The campsite is the most picturesque of all along the trail. Temperatures drop to near freezing at certain times of the year because of the altitude at XXX m but Martin has rigged up two hot shower buckets which compensate for the cold.

We have a welcome surprise tonight – this is the half-way point where you can send in some treats to add to the evening meal – self-saucing chocolate pudding with a tube of condensed milk is a favourite of past trekkers. In addition to this we have fresh food supplies which we bring in by helicopter. 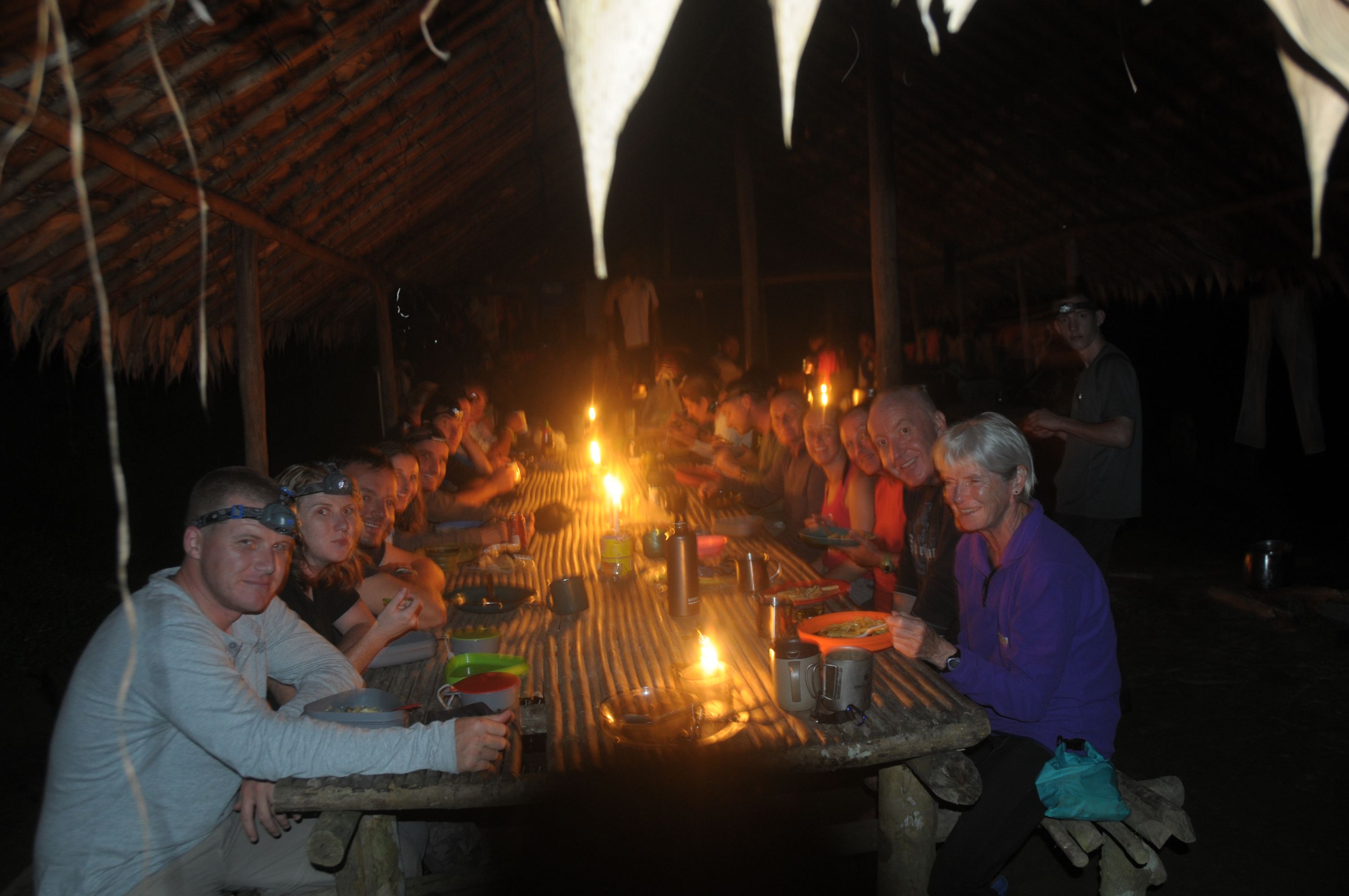