Owers Corner to Imita Base

Day 2: Owers Corner to Imita Base via the Goldie River

After breakfast we do a final check of our gear and board the bus for McDonald’s Corner on the Sogeri Plateau.

We cross the Laloki River below the lodge and pass a monument at the road junction at Depo (the location of a wartime army stores depot). Two kilometres along the road we pass the site of the Papuan Infantry Battalion Training Depot and a short distance beyond that was the Royal Papuan Constabulary Training Depot.

Five kilometres further along is McDonald’s Corner and the entrance to Ilola Plantation owned by Captain P.J. McDonald in 1942. This was the start of the pre-war Kokoda Trail. 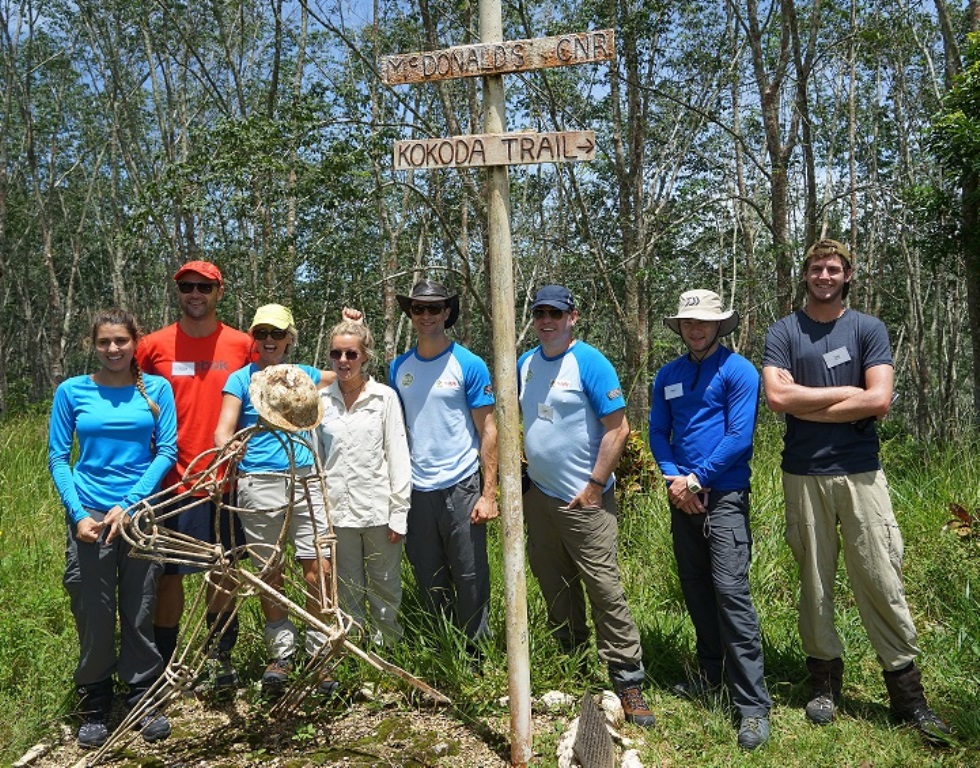 P.J. McDonald was a Light Horse veteran from Gallipoli and a larger than life Territorian character. A carpenter by training, he arrived in the Territory in the early 1920’s and built the first stage of the Steamships Trading Company store in Port Moresby. He became famous for the generous hospitality he extended to our troops.After a briefing at the monument constructed by Captain McDonald's son, Bob, as a tribute to our troops we continue in the bus to Owers Corner which is 635 meters Above Mean Sea Level (AMSL).

McDonald believed that much of the suffering of the Kokoda campaign could have been avoided.  He had told the military authorities of another way to reach Buna and Gona on the north coast of Papua – a route that, if taken, would have enabled the Australians to hit the Japanese in their flank.  His advice was ignored – as was all the later advice from our front-line battlefield commanders.

‘When war started the army built a ‘corduroy’ road of timber saplings laid side-by-side through to Owers Corner – a further 12 km along the track. This location is named after Lieutenant (later Captain) Noel ‘Jerry’ Owers, a surveyor of the New Guinea Volunteer rifles, who was given the task of surveying a road that would bypass Uberi, Imita Ridge with its ‘Golden Stairs’.  It was an impossible task and the project was dropped in early October 1942 after the jeep route had been developed only as far as the “Goldie River.  The junction of the new road and a walking track, which formed part of the original overland mail route coming in from Sogeri and Subitana further to the west, was called Owers Corner.’

This was the end of the road and the start of the trail in 1942. It was here finally that two 25 pounder artillery guns were located to provide heavy fire support to our troops for the first time in the Kokoda campaign. They were able to fire over the troops on Imita Ridge and directly onto the Japanese positions on Ioribaiwa Ridge 10 kilometres away. One of the troops later exclaimed ‘the sounds of the shells passing over our heads was music to our ears’.

Here we meet up with our Koiari and Orokaiva guides and carriers – grandsons of the famous fuzzy-wuzzy angels’ who will guide us safely across the trail just as their forebears did for our troops in 1942.

At Owers Corner the track descends to the Goldie River where the army built a rough track using horses and mules to haul supplies and one of the 25-pound guns (called that because that was the weight of the high-explosive shell they were able to fire directly onto the Japnese positions on Ioribaiwa Ridge) We follow the track down the ridge, across the Goldie River and up to Uberi. 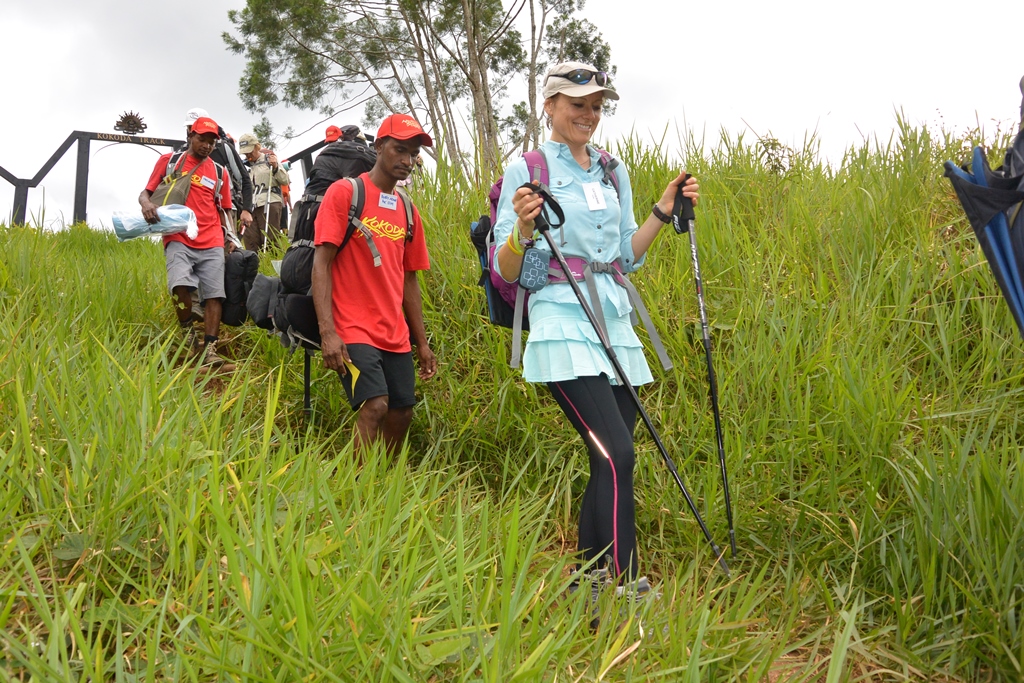 After a briefing on the significance of the area we begin a 40 minute trek down to the Goldie River.at 401 m AMSL.

It is important to remember that from now every step we take will be on land owned by a community, family or tribe under their system of customary land ownership. If you are in any doubt about the correct protocols to be observed at any time ask one of our guides who will only be too willing to help you.

The Goldie River is named after Andrew Goldie, a Scots naturalist employed by a London nursery firm to gather exotic botanical specimens.[i]  In 1877 Goldie was part of an expedition inland from Port Moresby to Hombrum Bluff.  One of the New Caledonian kanaks in the party, Jimi, later approached Goldie and handed over what he thought was quartz with gold in it[ii].  News of the discovery later leaked out and resulted in a number of gold expeditions to the area.  It is possible that Andrew Goldie’s exploration party in 1878 may have crossed the river where the Track goes today.  In his journal Goldie recorded ‘the black sand of the river yielded gold at every prospect’.[iii]  Of the river, he reported to the Royal Geographical Society he had named it the ‘Goldie River’, declining to elaborate on whether it was named after him or because the river was ‘goldy’.[iv]  The Governor, Sir Hubert Murray, who recorded in 1912 in his Papua, or British New Guinea, gave a more informed viewpoint when he wrote, ‘Mr Goldie did a lot of collecting … on the river that bears his name.’[v]

We then have a 10 minute gradual climb to abandoned village site of Uberi, named after the Ebe or Eburi people[vi].  These people had resisted early European exploration inland from Port Moresby by attacking and repulsing early expeditions.  In Hawthorne’s book on the Kokoda Trail he reports that the:

‘continuing defeats on white explorers, coupled with a rich bounty of discarded expedition supplies, had a stimulating effect on the warrior’s confidence.  It led them to a belief their prowess in battle was exceptional and if no white man would come to their villages to fight (because of a government ban), they would go to the white man, or at least to other, friendlier, native tribes associated with the white man.  Accordingly, they began to attack their weaker neighbours and ‘killed off most of the villagers around.[vii]

The village was used by the Australian New Guinea Administrative unit as a support area during the campaign – it was also a transit camp with up to 400 diggers jostling for position as new troops went forward and wounded troops returned from the front.

After Uberi we continue our gradual climb via a number of creeks - Abido, Koelo, Wiraro and Kukuiro - to our campsite on Lubu Creek at 510 meters AMSL where we settle in for our first night. 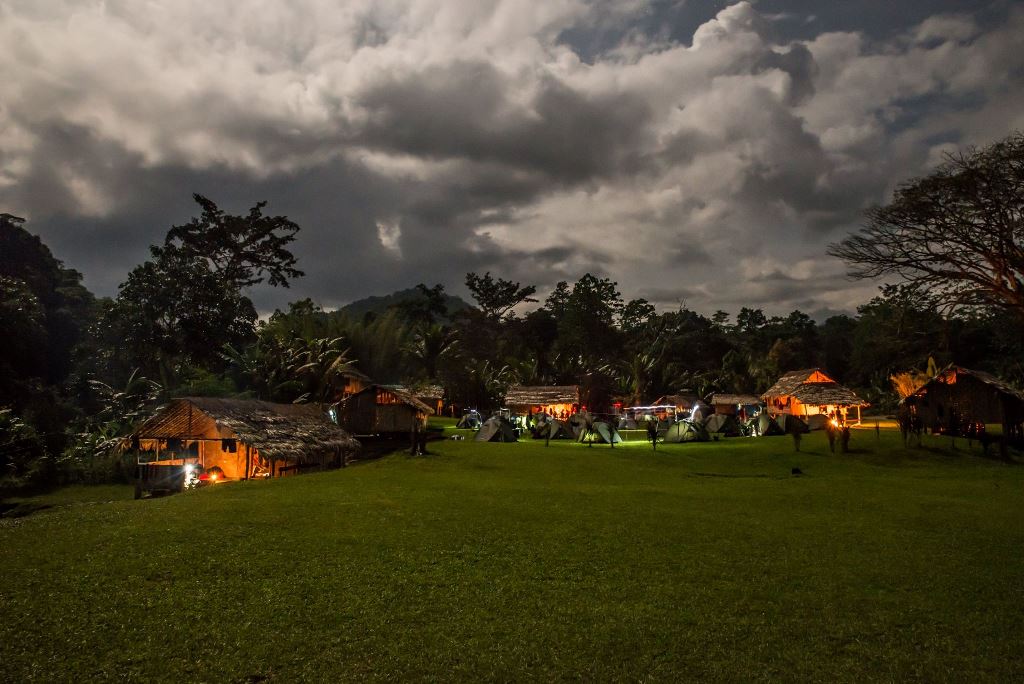