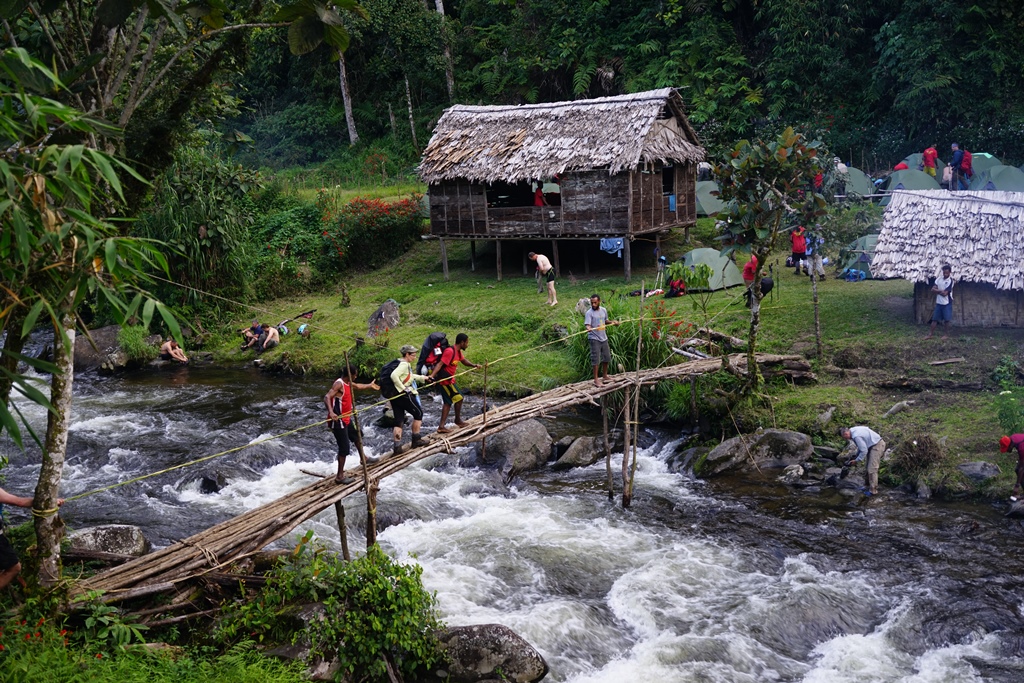 After Reveille, breakfast and pack-up your trek leader will check your welfare then give you a detailed briefing of the day ahead where we cross the highest point of the Kokoda Trail on the Owen Stanley Range.

We then trek up towards the Boili Mail Exchange Point at 2005m AMSL (this is where mail carriers from Port Moresby and Popondetta exchanged their mail bags) then down to down to Crossing 1 at the junction of Eora and Wase Creeks at 1940m AMSL for morning tea.

This was the start of the Templeton’s Crossing campaign – an area that takes us around four hours to trek took our troops 13 days to fight their way through – and a further four days to capture Eora Creek.

Your trek leader will provide you with a detailed briefing on the tactics employed by the Australian and Japanese soldiers and the strategic impact of the campaign amongst the armchair generals and their political leaders in Australia.

We then trek up towards the Kokoda Gap at 2109m AMSL. Here we enter the moss forest area – this is nature’s wonderland – birds of paradise, giant pandanus trees, numerous varieties of palms, fern colonies, fungi – it is difficult to imagine that this was the scene of such a desperate battle in 1942.

We continue trekking up towards the highest point of the trail to the east of Mt Bellamy at 2320m AMSL. Approximately 35 minutes from the Kokoda Gap is a junction with the Bert Kienzle track at 2245m AMSL which leads to the edge of Lake Myola at 2145m AMSL for lunch.  This is a prairie like landscape which is an extinct volcanic crater discovered by Captain Bert Kienzle who was in search of a resupply base.  He named it after his commander’s wife, ‘Myola’ – an aboriginal name meaning ‘break of day’.

Your trek leader will provide a detailed battlesite briefing on the significance of the Myola lakes to the Kokoda campaign.

From here we trek upwards through the Moss Forest to Tovovo Ridge at 2025m AMSL then down to the Kagi Gap lookout at 1835m AMSL. The Japanese soldiers were able to see the searchlights around their objective Port Moresby from this point.

We continue down the ridge to our campsite in Kagi Village at 1405m AMSL. Kagi has a population of approximately 120 people with an airfield, a VHF Base Radio, elementary school and health centre.